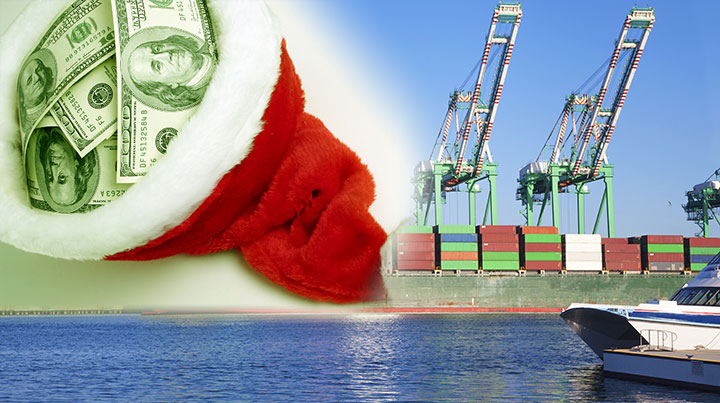 Santa with a Surcharge? Continuing Waterfront Drama at LA Port

Drama continues to unfold along the west coast ports from Tacoma to Los Angeles. Despite another recent intercession from LA Mayor Garcetti attempting to bring parties to the negotiating table and avoid work slowdowns and stoppages, talks stall and port congestion mounts. Delays, especially at LA and Long Beach Ports threaten to make this a Christmas filled with empty stockings and disappointed shoppers.

Carriers Strike Back at Strike Threats

Earlier this year, several Transpacific ocean cargo carriers rattled their swords and announced the possibility of applying surcharges to exporters for labor-related delays and service disruptions at west coast ports. Now they making good on their threat. Effective yesterday, November 17, 2014, a group of lines that operate between the US and Asia have indicated they will implement congestion charges of up to $1000 per 40 foot container (FEU) for transporting cargo via US west coast ports.

Given that these carriers have just recently begun to recover from the 2007 recession and typically operate on thin margins, applying surcharges could provoke an unintended backlash. Nevertheless, carriers are incurring losses and unanticipated expenses due to blanked sailings, skipped port calls, vessel re-routing, and additional vessel chartering in efforts to maintain schedules. Fees are also adding up for detention and storage charges, extended gate hours, tug services and increased trucking charges related to inter-terminal transfers. All tolled, surcharges seem inevitable.

Not surprisingly, the National Federation of Retailers and the top brass from major retailers like Macy's and Walmart's, have written the President asking for federal intervention to prevent a possible west coast port strike. According to a June 2014 study conducted by the Federation and the National Association of Manufacturers, commerce through the west coast ports accounts for an estimated 12.5% of total US GNP. While experts may argue over the exact economic value, it's clear that there is a great deal at risk. We will work to keep you informed as this continuing drama unfolds. For more information on the importance of west coast ports and US GNP, please see: https://nrf.com/news/report-shows-economic-importance-of-the-ports